An apology (with associated excuse) and a Winner

Forgive me Interverse / Interwebs / Internetalonians...whatever my world wide webbage of peeps prefers to be called...
Anyway, where was I....
Forgive me [INSERT PREFERRED INTERNET COMMUNITY TYPE TITLE], for I have sinned.
It has been over a week since I last had more than 2 minutes of consecutive net access to sit down and write a post.
Yes, I'm okay - thanks for your concern.  It was tough, I did get the D.T. style shakes a number of times.  I actually found myself rattling away, typing on the table top.  No I'm not being sarcastic.  Yes I really did it.  Being that my speedy typing is my one single life skill, I was obviously feeling a bit below-average and needing to show off my typing prowess.  So it was with much hand-slapping from #1 Hubby over the Easter break, that I tried to curb this new side effect of my blogging/twitter/ Facestalker Facebook addiction, of absently bashing out morse code style messages on the table top while holding a conversation,  yelling at  talking to the kids etc.
I tried to self-medicate with vodka, champagne and caffeine.  It worked, for the most part.  It also helped drown the warring twins out fabulously.  Nothing could drown out Miss5's lamenting over the lack of cable television or digital free-to-air TV channels "in the sticks".
Can I just say - we were a mere 1.5hrs from the city.  Hardly the sticks.  But, what I had planned to be the kids' introduction to lawn / grass and blue skies, trees, fresh country air and open places, was a bit of a letdown on the parental front.
The twins tiptoed around the lawn, until they realised it was attached to a road.  Then they were off.  Miss2 will be weighed down in future (Mafia style...concrete blocks around her ankles), because she is super fast for her little 2yr old self, and was found on more than one occasion at the end of the road before #1 Hubby or I could hurdle the baby gates and catch up to her.  No idea how she managed to get over the gates in a quicker (and probably more graceful) manner than her less vertically challenged parents?
Thankfully, the #1 Grandparents' house is in a quiet cul de sac - or, you know, dead-end for those of you not living in France where the term cul de sac seems more appropriate.
There was one occasion where she got slightly further away from me....but I haven't told #1 Hubby about that yet, and he would have kittens if he found out.  So I'm keeping that one to myself for now.  Seriously, he would give birth.  Then we'd have to long-haul it over to Oprah for the guest appearance, and quite frankly, I am not stupid enough to sit in a tin can plane for that many hours with my 3 kids.  And so that's the other reason I'm not going to fess up to the more hair-raising dodgy distracted parenting fail of the extended Easter break.
Besides, it'll only ruin my next post where I bang on about how crap my Easter was, being the only mature adult running the house (yeah...for real...I was the closest thing to a responsible adult).
So, back to the matter at hand.  Because there actually is one.  It's not all about me and my winy rant over crap net access.
Pinocchio DVD giveaway - better late than never people!  My sincerest and most humble apologies go out to Sonia Wilson for not posting her win 3 days ago when I was meant to.  I blame the rural internet.  In the same way people blame the old school mail system of letters and stuff going missing and being late.  Put simply, it's just not my fault.
Here's the piccy from the draw to give me full credibility.... 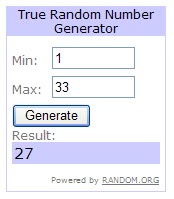 So, Sonia Wilson....come on downnnnnnnnnnnnnnnnnnnnn!  Or, at least, email me your address so I can have the lovely and generous types at Porter Novelli send your prize in less time than it has taken me to draw and announce your win.  Unless, of course, there is a delay with the post (see how easy it is to blame it on the mail system?).
For everyone else, Snow White is still up for grabs.  Promise not to take 3 days to draw and announce that one.
Posted by Parental Parody at 10:12 AM