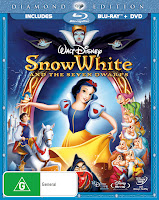 The original and the best fairy tale.  This classic was Walt Disney's first ever animated feature film.

Snow White - What little girl didn't want to be her?  Who didn't want their own set of dwarf's?  Complete with a Prince Charming type and a happy ending.  What more could you want for your kids?

I may or may not have used chocolate biscuits in an attempt to bribe my friends into being my own set of 7 dwarf's, so they would clean my room for me and act as my slaves.  FYI : It didn't work, chocolate biscuits were not enough of a drawcard to take on the names Sleepy, Dopey, Sneezy etc. etc.
I've since produced 3 of my own dwarf's, who I refer to as Whiney (Miss5), Tyranty (Miss2) and Princessy (Mstr2).  If I include #1 Hubby I also have Wanky (ho ho...will pay for that one later), and #1 Brother next door is Grumpy - only because I can't have 2 Wanky's.

It is almost worth having another 2 kids to get a full set of my own personally named dwarf's.
BTW...dwarf's or dwarves?  Or is it dwarfi?  What is the correct term for multiple dwarf?

You know, I am quite jealous of Snow White and that nap of epic proportions she had thanks to the poison apple.  Mothers...can you imagine taking a nap uninterrupted by crying, whining (or smacking on the head in my case, as the twins have finished whatever snack I've tried to distract them with while I catch a few zzz on the lounge).

Just once, it would be nice to have a Snow White moment, and be woken by true love's kiss (in the form of Vin Diesel) and not a slappy smacky twin or a blood curdling whiney grizzle.  I'm just saying. 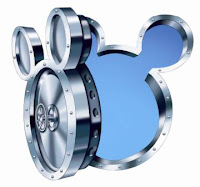 ﻿
Tying in with last week's Pinocchio review and giveaway (and my mini ranty-soapbox moment) - the Walt Disney Classic's vault is still open.  But not for long.

So, it is with much gratitude to Walt Disney Studios Home Entertainment and Porter Novelli, that I have a copy of the amazing Snow White Diamond Edition Blu-ray and DVD Pack to give away.


How do you win this awesome pack?

1.  Follow this blog (because if I'm super nice they may give me other cool stuff to give away)
2.  Follow me on Twitter or Facebook (abbreviated random ramblings aplenty...)
3.  Comment below confirming you're following
AND tell me something your ideal Prince Charming would need to have
(wit, money, abs of steel - all on my wish list)