And so it starts.
Way too early, in my opinion.
Miss5 has started refusing clothing.  Nothing new in itself.  Except, now it's on account of what other girls are wearing.
I know it's completely irrational and O.T.T - but my response is dread, sadness, horror, fear, gut churning stuff.  She is only 5, and already the image-conscious peer-pressure fashion conformity stuff has started!
All over this....
Versus
Miss5 refuses to wear anything but skorts to school.  The incredibly fashion-challenged, practical yet hideous, skorts.
I've tried to explain that her preferred 'skorts' are in fact pants.  But she calls them a skirt and in her world she's never wrong - despite how often I take the bait and try and convince her otherwise.  Which only ends up with me in desperate need of wine and/or sedatives, and searching for a clock to see if it's too early for either/both.
To put this epic disagreement into perspective - this is a girl who is currently wandering around the house at 7:05pm in a high visibility Road Workers' vest :
Please note, the shoes are sparkly and glittery (which doesn't show up on the dodgy laptop webcam pic).  Because that's what she teams with a tiered multi-coloured skirt and a high vis safety vest.

So, to say that her taste is a bit flawed (and her internal thermometer - as it is currently about 14 Degrees Celsius and this is what she's wearing) is like the mother of all understatements.


She clearly listens to her mother only when I don't want her to, not when she should.  Because when I asked her why she was dressed like that, her response was "because that's how I roll, Mum".  I shit you not.  Something I regularly say to #1 Hubby when he questions me on stuff, because I know it shits him.


You reap what you sow, karma coming back to bite me in the ass - yeah I know, all of that stuff.


Her bestest buddies at school wear the school skirt, dress or skorts, and so does she.  With the onset of winter and the plummeting temperatures, her mates have started to wear the mother of all comfort-wear (besides the Snuggie), tracksuit pants.
But not Miss5.  Because one single friend is still wearing her dress, so will she.
Recently, that friend switched to tracksuit pants.
But not Miss5.  Because she is allergic.  That was her deadly serious reasoning.  Shades of her mother again, this time in creating fake medical conditions to get out of something school related (refer to my admission that I suffered many chronic, serious - but ultimately fake - asthma attacks in Primary School, just to get out of anything requiring a sports uniform).
I've tried everything to convince Miss5 to wear the damn tracksuit pants:
When I picked her up from school today, it was the last straw.  She is shivering her little goosebump clad legs off.  From the other side of the playground I swear my mother-radar could sense snot forming.
So I did what any good parent would do as a last resort.
I bribed her.
We went straight from school to the shops, with negotiations commencing the second we got in the car.
She didn't want chocolate, she didn't want a slushie.  She  didn't want Dora The Explorer yoghurt.  She didn't even want broccoli (yeah I know that one was futile, but figured I could just throw it in the mix, on the off chance she wasn't paying attention and might agree to it).

It came down to this: 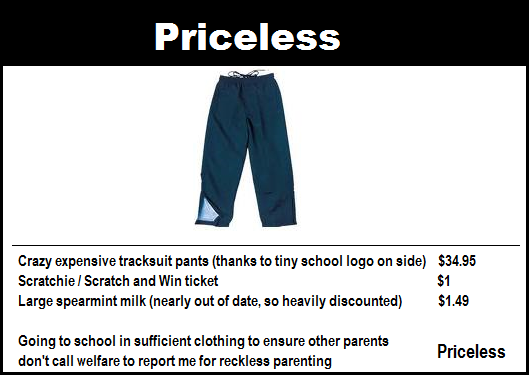 Total product of her Grandfather, #1Pop, Miss5 refused all age-appropriate bribery, preferring a $1 scratchie to deign to wear the much maligned tracksuit pants for one day.
The large spearmint milk got me two more days of tracksuit pant patronage.  It took some fierce negotiating on my part, but I got 2 days for the spearmint milk since it was a large carton, not a small one.  I covered up the discount sticker with my hand, while negotiating, just so she didn't try and screw me over and demand only 1 day on account of it being on  sale and nearly out of date.
She won $5 on her scratchie
Miss5 : 0     Parental Parody  : 1
Posted by Parental Parody at 5:00 AM