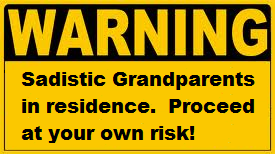 I write this post while seething.  In between yelling at the twins and saving plants and flowers from sudden death, I type.

I think my parents are finally enacting their revenge for the many years of *bliss* I subjected them to as a child.

In the interest of full disclosure,  before my Mother dobs on me and comments with all the gory details in a far too dramatic and inflated manner  I will admit to doing the following as a child:


All of this sounds semi-feesible for a teenager, right?  Sort of.  Maybe?  Well I'd *achieved* all of this before I hit double-digits.  Most of it by age 8, in fact.

So my parents have had *a few* years to sit and stew and seethe.  A few years to plot and plan their revenge.

You know that old chestnut that all parents come out with :

Now that time has come, my parents can hardly contain their sadistic delight.

Grandparents may look all cuddly and silver haired (yes that's right Mum, I went there...) - but don't let that fool you.


They are evil geniuses, who have spent a number of years waiting for us to befall the same fate they did - having kids.


My parents have had almost 6 years to enjoy watching me go through the same stress testing parenting that they went through with me.


Well, they went through it until I turned 12 and they shipped me off to boarding school (that's right Mum, I went there too...).


They've loved every minute of it.  They don't even bother trying to hide their sick delight as I struggle to maintain control, as my voice escalates, as Miss5 morphs into a calculating and smart mouthed mini-me.

But now they want more.  They want to see me suffer even more.

So now they actively try and set me up.

#1 Nana comes to visit, and buys Miss5 lip gloss from the $2 shop.  I spend the next 2 days trying to convince her not to eat it.  And running behind her with a cloth to wipe it off of every. freaking. surface.

#1 Pop takes the kids for milkshakes and chips.  Often an hour before a meal I've spent a great deal of time preparing and stuffing with healthy vegetables.

Today, it's raining so the kids are stuck inside.  #1 Pop (AKA the evil bastard) waltzed in brandishing a bag of marshmallows, and a bag of lolly snakes - and he specifically picked out the RED ones.

He got 2 kiddy bowls, and filled them up.  FILLED. THEM. UP.

Then, he waited for the twins to finish them, and filled them up again.  AGAIN.

Then he said goodbye, and retreated next door to #1 Brother's house to read the newspaper in peace.

I think you'll agree, that, while it is highly disrespectful to refer to one's elders, parents, pretty much anyone as a WANKER - he totally deserves it, no?

What ensued was a panicked rush of endorphins for me, as the twin tornado amped up to maximum feralness, on account of the severe sugar rush that was hitting them.

I let them outside - in the light sprinkling of rain - out of desperation.

Mstr2 was half running - half bouncing, on the outside of the trampoline.  Outside the safety netting.  He was brandishing a pink feather covered fairy wand in one hand, and a child sized cricket bat in the other.  He was smacking the crap out of anything in arm's reach as he ran/bounced around the outside of the trampoline.  The flowers, his sister, everything.  All the time, screaming out "I'm the man!" - his latest phrase of choice.  Word.

Miss2 was hightailing it up and down the length of the backyard, arms outstretch and ripping out every single flower, leaf, branch that she came into contact with.  She stopped at the sand pit at the end, and screamed at it with all her might - before turning around and running back, again decemating my garden.  Repeatedly.

All on account of the sugar high created by #1 Pop.

As this is taking place, he is sitting, reading the paper, in #1 Brother's courtyard next door, laughing as my voice gets to that high pitched, screachy, squealy level, as I struggle to maintain a sense of control.

I am going to start frisking him before I allow him through the door.  If only they made lolly detectors like metal detectors, I would install one on the front door.