#1 Hubby's competitive nature came to the fore at Miss5's recent school sports carnival (the full exposé can be found here).  It reminded me of another occasion where a sporting event turned him into The Incredible Hulk.  And I figured, what the hell - I’ve extensively  taken the piss out of  detailed my own shortcomings in the form of my crappy parenting skills, the dodgy stuff the kids do, and my sincere affections for vodka, wine, Wentworth Miller and The Rock - It’s time for #1 Hubby to share the spotlight once again.

So today I recount the one time we attempted an outdoorsy type couples activity.

The one. single. time.

'Twas Spring of 2004.  We awoke on a Sunday without hangovers  for the first time in  FOREVER  a while.  As a result, we had no idea what people do on Sunday mornings besides suffer in bed and bemoan the excesses of the previous night?

At a bit of a loss, we somehow came up with the idiotic idea of playing tennis.  Together.

Apparently I owned a tennis racket.  Who knew?  It was found in the garage underneath other carefully stored valuables like the rusty BBQ, disintegrating outdoor furniture covers, and dust covered boxed sets of fancy pants crockery and cutlery that we never use, on account of never having a group of 10 guests over for a 6 course black tie dinner.

With tennis rackets located, we got ready.  #1 Hubby shook his head and sent me back to swap wedge heeled sandals for sneakers, and my dress for shorts and a singlet.  I sincerely hoped that the fashion police weren’t going to hold this against me.

We drove to the only tennis courts I'd ever seen in the entire metropolitan area.  Such was my intense interest in all things outdoorsy, sporty, or tennis.

I was there to have a bit of fun, and maybe make a bit of headway towards reducing my tuckshop arm wingspan.  That is all.

#1 Hubby was there to go all out, as if he was the love child of Lleyton Hewitt and John McEnroe.

I should’ve twigged to his killer intent when he was warming up by bouncing up and down on the spot and doing lunges.  Or when he started doing helicopter impressions, swinging his arms around to loosen his shoulders up.  Instead, I was too distracted by how lily white my legs were, and wondering if there was a brand of DIY fake tan that would not make me look like a fat orange Oompa Loompa.

I wasn’t allowed to serve, because apparently you can’t do it under-arm style.  I called bullshit on that, but #1 Hubby had a melt down and refused to hit the ball back to me if I continued to treat the game with such disrespect.  It didn't help that I had the ball up my top, doing a tri-boob impersonation while he was lecturing me.

So, instead, he served the ball to me.  Actually, that’s not entirely accurate.  He launched a speeding missile at me that resembled a tennis ball.  I swear it shaved off half an eyebrow as it whizzed past my head.

#1 Hubby let out a very loud “COME ONNNN!”, complete with Lleyton Hewitt puppet-hand to the forehead.  Seriously, that move should only be used by The Wiggles and Play School hand puppets.

He then conveyed how thoroughly disgusted he was that I had missed such an awesome serve, by tossing his arms in the air and rolling his eyes at me like a petulant teenager.

And so the next 20 minutes passed with me not really trying. At all.  My arms barely moved.  It was like they were glued to my body above the elbow.

If I did hit the ball, I deliberately lobbed it just over the net so he couldn’t get a rally going.

As he regressed into an infantile tantrumming man-child, it fed my inner sadistic teenager, hell bent on really giving him the shits.

It was truly delightful.

I'm assuming this is why people play tennis socially, yes?

I had a ball (pun intended), until #1 Hubby threw his racket on the ground in disgust.  And I do mean THREW IT.

He then stormed out of the courts, flatly refusing to return unless I took the game seriously.

I promised I would.

Less than 5 minutes later he was out of there.  Again. 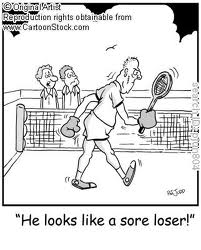 Once I recovered from my hysterical fits of laughter I trotted after him, but he was seriously out of there.

I jumped in the car and found him just down the road - all stomping legs and swinging arms, gripping the tennis racket like a weapon.  I was truly concerned that he'd get enough velocity going to take flight.

Cue more hysterical laughter, punctuated by some horn tooting, as the car crawled along the road beside him.

He stomped all the way home.  I’m not even kidding.  That tennis racket did not stop swinging for well over 20 minutes.

While I may not have done anything for my tuckshop arm wingspan, I certainly gave my poorly stomach muscles a mega workout with the endless laughter.

And that is why we never ever participate in pairs or couples events, or anything that requires us to compete against each other.  Not Scrabble, not marbles, not Nintendo.