Ditching    :  my beloved Miss6 on her birthday night
Dribbling  :  to a sporting legend while all liquored up
Donning    :  a 'mo and becoming a 'Mo Sista for Movember

So Miss5 became Miss6 on Monday.  We celebrated by taking 15 of her mates to see The Smurfs movie.  As Miss6 had requested Katy Perry in the live format (no DVD, CD, poster etc. would do), this was the best I could come up with in lieu of close personal connections to Ms Perry.

When I say that we celebrated - I am referring to Miss6 and her buddies squealing the place down, while I writhed around in pain on account of my hurty ears.  This was when I was not escorting yet another child to the toilets, or issuing sustenance, or ssshhhhhing, or hissing at kids to sit down - in a nice and friendly manner, because heaven forbid someone else's kid thinks I'm mean or uncool.

Anyway I just wanted to tell that part of the story, so you don't think I totally fobbed my own child off on their birthday.  Because I was present and accounted for until at least 5pm when I had to get ready to go out.  As if that's going to save my motherly image.

On to the main purpose of this post....the reason I left my child at home on her birthday. 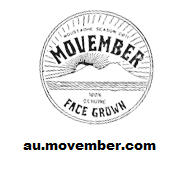 I skipped having a birthday dinner for  drinks and soccer player perving  the launch of Movember.

So here's a few Movember facts that everyone should know :

﻿
Movember supports key mens health organisations Beyond Blue and Prostate Cancer Foundation of Australia.  Also, one I wasn't aware of before this, Foundation 49 - men, if you've hit the big 4-0, then you should check this site out.  Especially if you're all blokey and tough and don't *need* to see a Doctor because you've convinced yourself that you're invincible.

﻿
Men, you get sick, just like every other living thing.  Don't ignore it.

#1Pop finally got off his arse (literally) to raise a few health queries of his own, and after a year of heavy duty chemo and a few nasty operations, he's still around to build my children various playthings, and take them out for milkshakes when I'm about ready to join them in a tantrum.  He is also responsible for teaching them "shed words", but I'm going to let that slip in lieu of the excellent handyman work and babysitting.  Also, he now frequents his Doctor's office more than I get to the hairdresser.  Clearly, he learnt his lesson.  Thankfully, in the nick of time.

Men, women especially the stereotypical whiskered old Nonna types, pets and hormone filled teenagers prone to early facial growth....shave, wax, bleach - whatever your chosen hair removal method - for the last time on 31 October.  Because November is Movember, and that means you need to grow yourself a flavour-saver for the month.

﻿
Some other highlights of my night, that Movember organisers did not necessarily plan :

Glowless has awesome hair and eyebrows.  Always.  Even when you go to her place for coffee and macaroons and she's spent the lead up panic-cleaning.  Even when plastered and helping you crash a 30th birthday party.  Even when she Tweets me to advise she's showing up in tracksuit pants (to which I said I would be waiting in a leopard print Snuggie, so that we were totally glammed up together).  Seriously...I spent much of the night in total awe and wonderment of her 'do.

I couldn't decide whether an uber blonde in a tighter than tight white dress had a pot belly or was slightly pregnant.  Which made it hard to make inappropriate jokes, not knowing whether I was simply being  jealous and bitchy  rude, or inappropriate and mean.  But, I did it anyway.

Movember Ambassador - AKA Mo Mentor - Dennis Lillee, and his kids are very pleasant and forgiving, even in the face of a *slightly intoxicated* wife of a mega huge cricket tragic.  At the time, I was positive Mr Lillee was dying to hear how I was missing my oldest child's birthday dinner to be there, and that my husband was a huge fan, and by the way I'm really sorry for bothering you, and gee you must get really sick of people coming up to you all the time and did I mention that I'm really sorry about that?

﻿
Seriously, at one point Glowless had to come and whisk me away.  So to tolerant cricketing legend Dennis Lillee, I so humbly and cringeingly apologise for rabbiting on and on about...erm...people like me, as it turns out.

Big thanks to the awesome Lynda and Nuffnang for sending me, affording me the opportunity to Ditch, Dribble, Don and Drink.

PP Mo Sista Out
Posted by Parental Parody at 5:00 AM