You know you've been married FOREVER when...

You know you've been married FOREVER when you remember your anniversary less than a week prior to the big day, and your immediate reaction is "myeh..."

You know you've been married FOREVER when your husband makes a mad dash to the service station on the Sunday that is your anniversary (as in yesterday), to buy a bunch of over-priced, 2 day old, wilting flowers.  The flowers that are strategically placed alongside major roads for thoughless idiots who have forgotten a momentous occasion.  Or acted like a complete drunken tool the night before. The two are not necessarily mutually exclusive....ahem.  No #1 Hubby, I did not appreciate hearing your crap U2 renditions from #1 Brother's house next door, into the wee hours of the morning.

You know you've been married FOREVER when you are more excited in the days leading up to your anniversary, about the guilt trip you'll be able to inflict on your husband when he realises he's forgotten.  It was like the countdown to Christmas.  I was more and more excited the closer the date got, and he still hadn't remembered.  Because I'm a bit of a masochist like that.

You know you've been married FOREVER when you spend THREE FREAKING HOURS on the morning of your anniversary, making two different kinds of shortbread dough, then painstakingly cutting out a message to your beloved, to mark your anniversary : 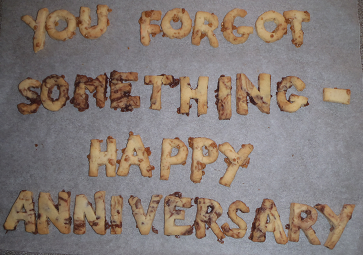 Instead of just buying him a card and a lotto ticket.  Or socks and jocks.

To be fair, he did remember - at lunch time.  Which is when he burnt rubber out the driveway on his way to the service station for the over-priced flowers and the box of Cadbury chocolates. 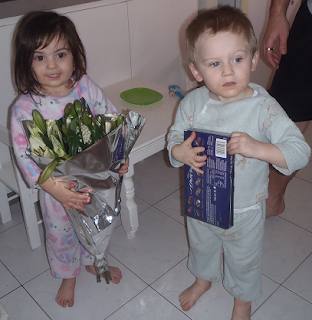 Stroke of genius having the twins present his hasty giftage.  Totally working the heart-strings angle.

Of course, if you ask him, he remembered during the week.  He chose not to wish me a Happy Anniversary before 12:24pm (yeah...I noted the time...for blogging accuracy purposes), or organise a card, or go out the day before when the shops were open, in order to go to an actual florist and buy decent, reasonably priced flowers.  Hell, even Coles and Woolworths sell decent flowers, right?

Anyway I made him pay.

He was dispatched to Hungry Jacks to get me my favourite Whopper with Cheese for lunch.  Celebrating in true romantic fashion, considering the first meal we shared on the night we met, was at Hungry Jacks in the city - lining out stomachs before we hit the clubs.

I also advised him that I will be going to the Digital Parents Conference 2012.  I tried for BlogHer 2012 - the mother of all blogging conferences - but it was only our 12 year anniversary, and he only took half a day to acknowledge it.  It would've had to be a significant anniversary, completely forgotten, for me to get to BlogHer without sponsorship.  So I'm keeping that in mind for when we hit 15 years and I can try and distract him so he forgets that one too.

In case anyone was wondering, this is what he thought of his gift, hand-made with love  and a teaspoon of sarcasm and a pinch of spite. 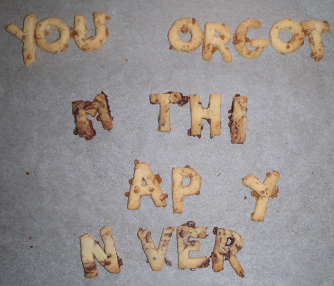