Where's the "OFF" button for my kids?

Miss3 got up crazy early.  We're talking early enough that she could've donned a mini skirt and hit the clubs for a couple hours before closing time.

After being put back to bed, she got up again some time later.  I'm not sure when because I didn't hear her.  I instead found her at 7am, in the bathroom, full body lip gloss (my expensive stuff, not her sister's $2 shop stuff), and my make up all over the white bathroom cabinets and tiles.

Mstr3 attempted to rise via osmosis.  He ran full force at the closed bedroom door and headbutted it.  Unfortunately for me, he did not knock himself out cold to sleep a little longer.  Instead, his tantrum woke everyone still sleeping.  To be clear, it was a tantrum at the failure of his bedroom exit strategy, not a cry of pain.  The child is indestructible.

Miss6 immediately sat herself in front of the TV for yet another day of school holidays entertainment.  Thankfully, the last one.  I felt like the worst mother on the planet (even after watching World's Worst Parents last night and feeling a bit self righteous that there are others out there worse than me). And so I attempted to spend all of 5 minutes reading with Miss6, until I heard the faint rustle of a wrapper.

Found the twins in the toy room eating musk Lifesavers.

Made breakfast of banana and yoghurt pancakes from scratch, and felt all parentally smug again.

Removed untouched banana pancakes from Miss6's plate because she'd prefer an apple for the first time in her freaking existence.

Consoled myself by eating all leftover no-added-sugar, home made, semi-healthy pancakes.  You're welcome, hips.

Miss3 started a slap-war with everyone, me included.  The one rule of the game being that she is the only one allowed to slap.  Cue whining, crying, tantrums from everyone else.  Me included.

Purchased one of everything, plus extras as opened in-store by the octopus armed twins.

Take Miss6 to chocolate aisle of supermarket and loudly advise her to take her time selecting not one but two chocolates, which she is welcome to eat in front of the twins as punishment for all of their crap behaviour mentioned above (and more, as this shit has been enacted upon me for almost 2 straight weeks now).  Twins look devestated.

Spurred on, I reinforce to the skeptical Miss6 that she can go to town and choose whatever she wants.  As her hand hesitates over the Freddo Frog display, I tell her to go for the jumbo size.

Yes I know this is all kinds of wrong on the parenting front, but I was holding on by a few frizzy strands of hair and not much else by this point.

All of this was witnessed by a mother from school, who has two of the loveliest, most polite and complimentary kids in the history of the universe.  Awesome.  Lucky for me, she's super nice and non-judgemental.  Phew.

Take the kids home and the twin tornado proceed to stealthly procure both of Miss6's chocolates from under our noses.  This is only noted when they are found in the toy room with chocolate everywhere.  I hesitate on my approach as they are both in the process of being toilet trained.  Thankfully, it is definitely chocolate.

#1Brother comes over from next door to talk holidays.  His, not mine.  He advises me of where he's going and where he wants to stay, because I'm the former Travel Agent in charge of all holiday bookings.  Awesome, I get to research and book this trip for him "in my spare time / when I have a minute".  Lucky me.

5 minutes later I find Mstr3 sitting on the potty, chocolate on the tiles around his feet.  Lean down with my bare hands and scoop up the chocolate.  This time it's not chocolate.

At this stage I cried a little bit.

Mstr3 assumes he's in trouble and launches into a massive tantrum while still on the potty.  Feet stamping and more non-chocolate being deposited from the soles of his feet onto my laundry floor.

Entire packet of wipes used to clean up the carnage.  Much gagging from me.  Many silent tears and prayers for a lotto win big enough to afford a live-in Nanny for me, and full time Daycare for them.

Phone rings for the 4th time in the past hour.   Prey it's not #1Nana again with another query or task related to one of her many holidays that I organise while reminding myself that I am not going anywhere.

This time it's a cold caller who's not trying to sell me anything, they're just after a quick 20 MINUTES of my time for a survey.  I politely decline, advising that as I'm sure they can hear, there are 3 unhappy children in the background screaming and whining, and I'm very sorry but I don't have time to do a survey.  Operator is still talking and trying to convince me to take the time for her survey as I again apologise and hang up the phone.

Simultaneously, the $2 shop crap craft supplies are consumed (literally) by Miss3 who is spitting glitter (literally).  Miss6 has moved on to the laptop.  Tell myself she's doing Reading Eggs and being educated.  Instead she's on the Nickelodeon site learning further petulant Tween behaviour from clips of Tween programmes I don't let her watch because I don't want her to learn petulant Tween mannerisms.  Too late.

Twin tornado have removed the office chair on wheels from its home and are zooming around the house on it.  Extremely fast.  Without crash helmets.  Currently tossing up whether or not to intervene.

Instead, I'm about to hit Ebay and search for 2 more, so they have one each.  Since these are clearly more entertaining than their shiny new bikes, extensive Christmas giftage, and various assortment of toys that are clearly a waste of money.

#1Hubby is going to be home late.  So I am stuck in solo-survivor mode until he arrives home too late to help feed, bath or bed them, but just in time to be hugged and kissed as they are in that super cute stage right before they fall asleep.

At which point he will assume I have exaggerated the entire day's events, and proclaim that he would've loved to stay at home with them all day - only he's not prepared to give up his job and become a stay at home Dad and make good on it.

All feralness considered, I freaking love them, but seriously...where's the manual?  I must find the "OFF" switch. 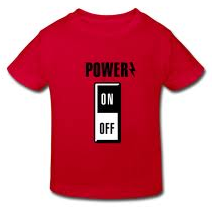 Kill me now, or send a Nanny with gourmet cooking skills and a crate load of Vodka.

Thank the Vodka Gods school starts tomorrow / today at the time of posting.  Because I think I have a fighting chance up against only 2 of them while Miss6 is off being educated.