He is 5 ½ years older than me, so today marks that blissful 6 month period between his birthday and mine, where I get to tell people he is 6 years older than me - thereby making me a youthful trophy wife (kind of like the 'Encouragement Award' trophy, but still, a trophy all the same).

I managed to convince him that I showered him with gifts in Bali, by way of nights out and expensive dinners and the like.  He is still in that post-holiday haze of re-acclimatising to real life, and so hasn’t realised that’s a load of crap and I simply forgot to get him anything.

We are going out to celebrate – and for once, I don’t mean Sizzler.  We’ve found a restaurant close to home that has a kiddy play room, so as his gift I am going to hold off on drinking and instead be the designated driver / kid wrangler, and allow him to consume copious amounts of booze with his surf and turf.  As long as we're all finished and out of there by 8pm, so I can get the kids home to bed and crack open a bottle of wine.

When we get home, I will offer up the remote and allow him to control the TV viewing schedule without complaint.  It will inevitably be football, and I will smile and say nothing.  Because it requires less effort on my part than putting out, and hopefully said football will distract him from  requesting birthday sex.

Surely sole control of the remote is far more valuable than any gift, right?

Now to share with you the birthday cakes I seriously tossed up getting: 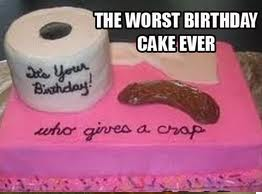 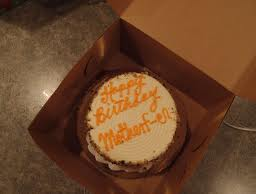 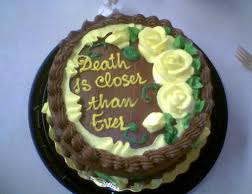 And to finish up, the winners of A Giveaway While I'm Away :


Congratulations #winning peeps!  Check your email.  The clock it is ticking.  You now have seven days to email me with your details (star sign optional).