I had one of those mega OMG OMG OMG hand flapping moments on Friday afternoon.

I arrived a little early to pick Miss6 up from school, and so I went to the office instead.

It's become a ritual for me to show my face in the office and ask if I'm still too early to enrol the Twin Tornado for Kindergarten next year.

The staff think it's hilarious that I'm so eager.  I tell them to laugh again once they've met the Twin Tornado.

They think it's so  amusing that I'm terrified I'll miss out on 2 spots, or worse, only be offered 1 spot.  That is exactly the kind of thing that would happen to me. 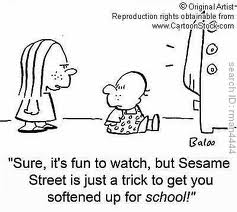 Miss6's school has gradually been completely rebuilt over the past 2 years.  It's almost finished, and now that it's nice and new and impressive lots of people want to go there.  I just know that there will be a mega influx of 4 and 5 year olds next year and I will miss out.

Despite all logic being to the contrary, this is my firm and angsty belief.  A worry that has gnawed away at me since...well...since Miss6 started Kindergarten herself and I did the first mental calculations on how long it would be until I could send her brother and sister too.

FYI - I have a count down on the bottom of my blog.  It's been there for over a year.  That's how long I've been seriously counting down and harassing the school office to complete enrolment forms for the Twin Tornado.

It's not that I don't want them at home.  It's not that I'm wishing away their toddler-hood.  It's just that I'm a much better, nicer, more patient Mummy when I have 2.5 days a week off-duty.

So anyway Friday afternoon I went in to the office to ask my recurring question. Again.

The Registrar smiled and without a word handed me one enrolment form.

Then I asked for another form, and she said "Oh no, I'm sorry. You can only have 1."

My face almost literally hit the floor, along with my stomach.

I had visions of living out the next 5-7 years in my car, going from school to school and sending my frizzy hair grey on account of daily road rage between 8am - 10am and 2pm - 4pm as I travelled the length of the city doing the school runs.  Meanwhile I was also making a mental note to check out what kidneys are selling for on Ebay, as the endless school run's would send us broke on account of crazy expensive petrol prices.

Still, at that point I was prepared to bargain away my entire amassed duty free alcohol collection in order to bump some other bastard off the list.

But I didn't have to resort to such drastic and inevitably disastrous measures.  The liquor cabinet can remain locked (at least until 4pm), because the Registrar was just taking the piss.

She was so pleased to finally be able to say yes, that she let me fill out one form for both of the Twin Tornado.  What a gem.

Enrolment complete, I had a spring in my step as I left the office.  The sun was shining.  I swear I heard birds singing over the sound of screaming school kids.

And I most definitely let out a squealy, high pitched "OMG OMG OMG WOOHOO!" complete with flapping arms.

As at 0500 WST (GMT +9) when this post went live, there was officially 252 days, 3 hours and 30 minutes until the Twin Tornado start Kindergarten.

I repeat: OMG OMG OMG.  Do you have any idea how many credible scenarios I can dream up in 2.5 child-free days a week, in which George Clooney and I meet and run away into the Nespresso scented sunset together?

Email ThisBlogThis!Share to TwitterShare to FacebookShare to Pinterest
Labels: Bring on the Bubbles, Embarrassing Parent, Get thee back to school, Mentioned George Clooney in another unrelated blog post, Nearly lost my shit, School, Twins