Working late, or is he?

It's gradually dawned on me that #1Hubby is working later and later.

Not late-late.  No all-nighters, no coming home after the kids have gone to bed.

Just late for him.

I've noticed a pattern to his alleged working late.

It usually occurs when #1Nana is down for a visit.  While #1Hubby gets on famously with his MIL, he does seem to time his working late with her frequent visits.  I suspect it's because he's sick of being the wine runner and having to top up her glass and mine, as we compete to ensure we don't get less than each other.

Which is usually followed by a bit of helpful and totally not subtle MIL tips on child rearing, home duties, football, work, and anything else #1Nana has become an expert in.

Or when it's one of those rare frequent times that I declare the house a bomb site  bio hazard bit messy, and declare the evening will be dedicated to cleaning.

Or when he's not keen on the dinner I've decided I feel like making.

Or the same time every month, when his mere existence shits me for 4-5 days. 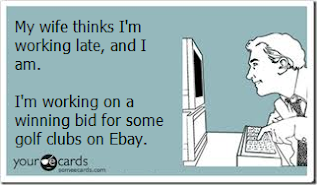 The thing is, I'm far too lazy to get in the car and fight peak hour traffic and catch him out.

I'm positive he's kicked back in his office, reading the newspaper, sipping coffee, feet up - I just can't be arsed packing the kids into the car for a surprise visit to expose him.

Instead, I've started bathing the kids later, so that he is always home to do it help.

Also, I don't tell him what we're really having for dinner if it's meat-free and therefore un-blokey.

But that's not enough.

How can I screw with him in return?

You know, to keep the relationship fresh and exciting.