Which was supposed to be some witty word play on "We're not in Kansas anymore, Toto".  Word play fail.

I strayed from my usual routine of heading to Macca’s when I need free Wifi and caffeine while the twins hit up some brightly coloured plastic play equipment for their daily exercise and muscle development.

It was a stupid thing to do, I realised that before I even stepped foot over the threshold….of a new play centre. 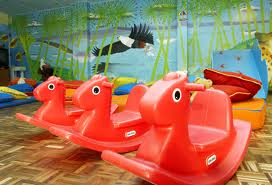 It was like a private club, this particular centre.  As I entered with the Twin Tornado, heads rotated (totally Exorcist style, I swear) and conversation stopped.

Who was this intruder?  Did she not know that Mums Group A, Playgroup B,  Neighbourhood buddies Group C occupied the centre on this day at this time?

Cue awkward face-flush as the in-crowd scan me and my kids and carry out a quick visual judgement summation.

Apologies that my kids rocked up in tracksuit pants and not jeans from the Osh Kosh Winter 2012 collection.

Please forgive my own faded jeans and crumpled but semi-clean top, just be thankful I reluctantly changed out of the baggy tracksuit pants and ripped sweater in order to come here.

I’ll accept a slight snicker and/or disapproving brow raise that Miss3 is sporting a nest in place of hair, since I forgot to brush her hair before we left home for the 3rd day in a row.

It’s a play centre.  It’s not an elite private school.

I scurried over to the farthest table in the corner.  No descriptive text, I really did scurry.  Like a rather large cockroach. With rather large baby cockroaches in tow.

The cliquey groups returned to their cliquey conversations and I madly ripped out my iPad to avoid having to make eye contact with anyone.

Then I realised the twins were wearing stained socks.  Clean, but stained on the soles of the feet where they’ve been wearing them outside in the colder months.  OMG, the horror.

Somebody please show these kids some mercy and remove then from my person.  THEIR SOCKS ARE STAINED!  And they're from Best & Less!

Never mind the kid standing next to his fabulously yummy mummy with a finger up one nostril and a stream of yuckiness extending from the other nostril in to his open mouth (I’m sorry, I know it’s all kinds of ewwwww but I am illustrating a point here).

Ignore the kid licking the toilet door handle while waiting for his mother to finish checking her hair.

And the kid whose smug mother visibly turned her nose up at the chips and sandwiches others were consuming – he’s just Pro Hart in training as he spreads his BYO broccoli and avocado all over the table, chair and his person.  Also, delightfully, in Mummy's faux Prada bag while she's not looking.

I feel that the humble play centre is in drastic need of a do-over.  I had much time to ponder this while pretending to be focused on important work and not focus on the fact that I was the only one flying solo in the entire place. Because I do have friends, I swear.

Here's what should be important when it comes to play centres:


I would consider starting up my own perfect play centre, only the Twin Tornado are a mere 6 months off starting school and I’d be a total moron to consider surrounding myself with masses of noisy toddlers when the finish line and extended periods of quiet are within sight.  But anyone else can feel free to champion my cause and take up my ideas.  I expect nothing in return except life-time free entry and the secret booze code word.

You'll hear all about Friday’s school sports carnival (including fornicating animals and jazz hands. For reals).