No, we are not f*king there yet : A f*king giveaway

There's not a parent on the planet who hasn't heard of the epic "Go the f*ck to sleep" picture book for adults.  I remember a stranger emailing it to me before it was a global hit, before it had even gone to print.  I pissed myself laughing and nodded at every page like a bobble headed figurine.  Then I emailed it on to a few friends and that was all - apart from being super impressed that someone who doesn't know me personally but reads my blog, thought of me when they saw it.

A month later EVERYONE knew about it, and I was kicking myself for missing out on the epic "I saw it first" bragging rights and website hits that could've been, if only I'd been a little more generous in my sharing.

Anyway, you live, you learn.

And that is why I'm sharing this: 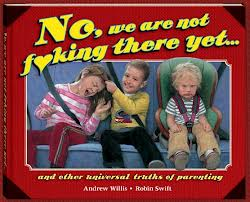 No, we are not f*king there yet...and other universal truths of parenting

If you can't relate to at least half of the poetic ditties inside, then you're doing it wrong (parenting, that is).

My personal favourite is Push the Shopping Trolley - an eloquent poem about the tantrums kids have in the middle of the supermarket.

This book would make an awesome Baby Shower gift.  Let future parents know what they're really in for.  Full disclosure, I say.

I have two copies of No, we are not f*king there yet...to give away.

For your chance to win

Follow this blog, because it's all pretty and new and re-designed and the follow options are now on the top right and well that's really all I've got by way of justifying my request

Comment below with the biggest parenting lie you were ever given.

Mine was that your children will thank you for being firm and setting boundaries.  They didn't and they don't.  They laugh, ignore them, and sometimes crap all over them.

I want to win a copy of No, we are not f*king there yet" with @Parental_Parody http://goo.gl/3rhvm

I mean, I probably still would, but the point is I wouldn't have to.  It would be a choice.