No multiple whines for FFS!? Friday this week.  Instead, I bring you one big fat FFS!?

I’ve been observing how Miss7’s teacher manages to keep the entire class quiet and attentive without raising her voice.


It’s a completely novel concept for me.


I’ve noticed she does a lot of rhythmic clapping to get their attention.


She claps a certain pattern and they all quiet down and copy it back to her. 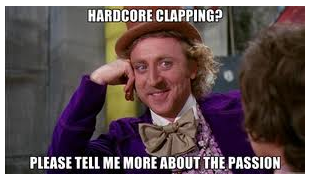 
An airport full of people, all excited to be going somewhere for the festive season.


In the middle of the airport is a moron, oblivious to the unwanted attention they are drawing to themselves.


That would be me.


So I enacted Miss7’s teacher’s calm crowd control method of choice – I like to call it The Happy Clapping.


I clapped out a short and simple pattern.


All three kids ignored me.


All three kids looked at me, puzzled.


I clapped again, spurred on by the fact that they were at least paying attention to me, even if it was with a mix of confusion and irritation.


I followed my clap-fest with a few “huh…huh…huh?”, because I know Miss7 is aware of The Happy Clapping, and joyously participates in class.  The Twin Tornado stand outside watching, and also join in.


Not one bloody sign of recognition from any of them.


And still, the moron perseveres.  I continue my method of, now very loudly, with exaggerated movements and enthusiasm, clapping out a rhythm, followed by a few “Huh…Huh…Huh!?” waiting for them to recognise and join in.


Those within earshot had stopped to look at the moron, sitting on the carpeted floor of the airport departures terminal, doing the displaced walrus impersonation…. 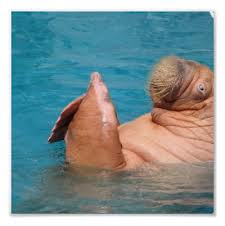 The little mini-bastards knew exactly what I was doing.

Not four hours later, they sat in the taxi on the way to the hotel doing it to each other.  Complete with walrus "Huh...Huh...Huh!", before laughing hysterically at themselves.  All the while, I sat quietly seething in a passive-aggressive manner that flew completely over their heads.

When I do it, it's just a moron acting like a displaced walrus.

When they do it, it's a few cute kids playing some sort of game.

This displaced walrus has since been placed in its preferred aquatic habitat – the swim up pool bar.


And the walrus mating calls. 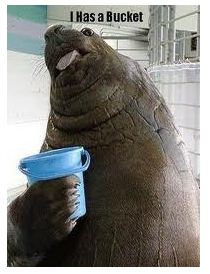