This post is not sponsored by Mitsibishi Australia or Joe Dolce, but I would like to sincerely thank (not) both for teaching Mistr4 the phrase "OH SHUTTUP A YO FACE!".  FFS!?

Last Sunday I spent the day preparing to work Monday to Saturday.  FFS!?

At 3pm Miss7's nasty cold developed an equally nasty rash on her torso and the insides of her elbows and knees.  FFS!?

I am all about the blind panic, and after a quick 15 second consult with the Google Doctors, I rushed to the local 7 day clinic claiming measles / meningitis / meningococcal.  FFS!?

Turns out it was a viral rash that would soon disappear, and she was, in fact, not remotely contagious and almost over the nasty cold/flu. No FFS!?

And so I took her home, humiliated and feeling like one of those over-bearing panic parents (FFS!?), but mostly relieved that she was not suffering from any of the awful Google diseases (No FFS!?).

Around 7pm Mstr4 started to cough and his breathing became laboured.  He was still happy and playing, so I figured he was probably just coming down with his sisters' cold/flu.  FFS!?

By 8pm he was wheezing constantly.  FFS!?

So I put him in bed with me so that I could keep an eye on him, and he promptly fell asleep.  No FFS!?

Just as I was dozing off I noticed his little body heaving with every breath, the wheezing extreme.  He was struggling to breath, so much so that it kept waking him up gasping.  FFS!?

So I jumped out of bed and woke #1Hubby, told him to stay with the girls and I was going to take Mstr4 to the childrens' hospital.

We were a sight - me in my delightfully chic moo cow PJs, carrying him in his spiderman PJs with matching slippers.  I expect we looked like we were late for a costume party.

Given his distressed state, we were rushed straight in.

And so we spent the night in emergency, half hourly medication and obs.

Of course Mstr4 is one of the percentage of people who have a reaction to standard asthma medication.  That being a feeling of giddiness, a hyped state, a restlessness.  FFS!?

He asked all of the questions.  FFS!?

He spoke to anyone who dared to make eye contact.  FFS!?

He chatted up every staff member, telling them they were beautiful, he liked their toenails, or they had a nice nozzie (nose).  Which would've been hilarious if I wasn't so panicked watching his stats refuse to stabilise while he laid out his smooth one liners.  FFS!?

He kept telling his machines to shhh when they beeped.  Every.  Single.  Time.  FFS!?

They moved us twice, trying to find a quiet area so that he would shut up and go to sleep.

Draped over me, refusing his bed.

His stats dropped further because he was sleeping, and so he needed an oxygen mask permanently.

So he was put on the bed and of course that woke him up, and sent him into a tantrum as he hated the mask and refused to wear it, instead offering to put it on his 'Goggy': 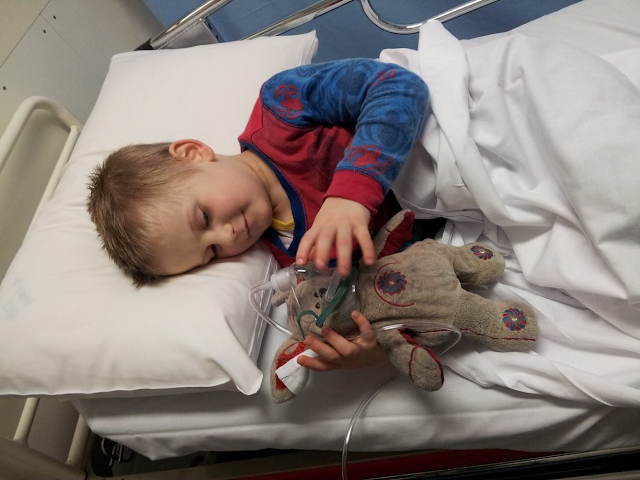 And so he was back to being draped over me on the chair, while I waited until he fell asleep on me again, so I could then hold the oxygen mask just above his nose.  FFS!?

For two and a half hours, moving with him as he tossed and turned, making sure the mask was just shy of touching his face.  FFS!?

Finally, at 7am they moved us to a room in the emergency department that had 4 other kids in it.

This bed had a TV, and Mstr4, who had only had 2.5 hours of interrupted and restless sleep, refused to go back to sleep and instead demanded to watch TV.

And the very first thing that he saw was this ad:


Can you guess what he did next?

He woke the rest of the room up screaming, in a delighted voice:

AHH SHUTTUP A YO FACE!

It was a truly delightful day, following zero sleep and maximum stress, as he gradually got better and continued telling everyone to shuttup a you face all day, with more and more enthusiasm as his breathing improved.  FFS!?

Almost a week later, he is his usual self with the addition of his new favourite phrase, which he will excitedly yell out to anyone.  FFS!?

Followed by me apologetically explaining that he saw a car ad on TV that featured that old song and he's really not being a rude and obnoxious brat, he is just singing the song from the car ad.  FFS!?

Thanks for nothing Mitsubishi Australia and Joe Dolce.  FFS!?