Dyson DC59 Review : It sucks, but in a good way 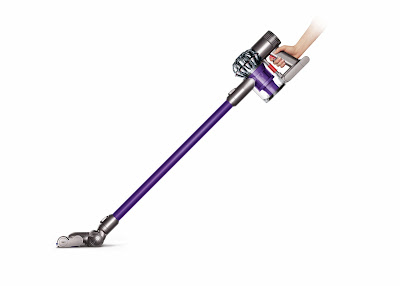 So I took part in a product trial and review.

#1Hubby laughed to the point of choking when a Dyson DC59 vacuum arrived on our doorstep.

He asked if I knew which end was up, then took to Facebook to publicly name and shame my vacuuming prowess... 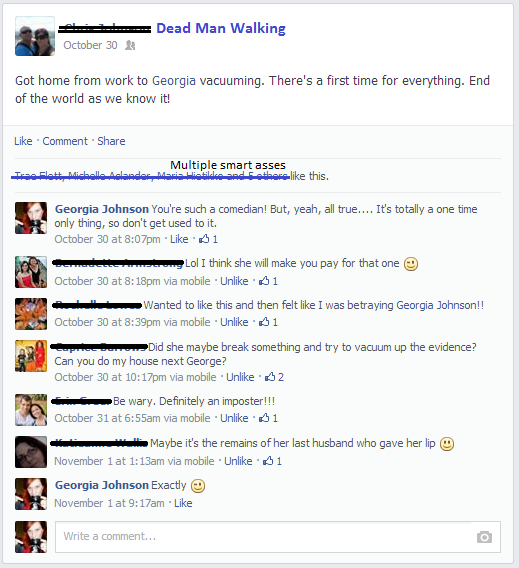 ...while I thought of other uses for the super powerful device.

But I can't tell you those because the internet is forever and I may incriminate myself at a later date.

What can I possibly say about the Dyson DC59 that isn't already obvious because, duh, it's a Dyson, and they know vacuum cleaners.

In my personal experience over the course of this trial, it is:

So easy, in fact, that one could do it with one hand while enjoying a refreshing beverage

Which may sound obvious, being that it is cordless, but I've had some absolute clunkers in my time.  Machines that require a bodybuilder to push, cordless or otherwise.  Which would be nice to watch, except I don't know any bodybuilders prepared to push my vacuum.

It's so mobile and easy to push that one could effectively operate the Dyson DC59 while draped on the lounge enjoying a coffee and some reality TV, vacuuming up the cake crumbs.

It totally sucks, the suckiest of all suckers

It is a super sucking machine.  Well, literally.  I'm not going to gross you out with pics of the volume of hair and fluff this bad boy picked up from my carpet and floors.  Lest I out my other poorly housekeeping skills.

In the interest of an honest review, here's the only two issues I had with the machine:

Firstly, the battery run time is 20 minutes.  I have three feral, dirty, children and one man child (but not me, I'm all flowers and cleanliness).  20 minutes wasn't quite enough for #1Hubby me to do our entire house.  I imagine it would be perfect for a unit or apartment or anyone not in possession of multiple dirty people.

And secondly, it caused a rift of epic proportions.

I'm preparing to call in Dr Phil and Judge Judy if we can't resolve this on our own.

I apologise for the massively lengthy segue this product review will now take, but I feel it's important to explain in case I go missing, so you know who to point the finger at...

#1Nana nearly wet herself when she saw a Dyson in my presence.  Because she knows I don't do vacuuming, and also because, hello, it is a DYSON.

So she took it for a spin and immediately fell madly and deeply in vacuum love.

Knowing that I had the option to buy the machine at the end of the trial, #1Nana was immediately all slimy and nice to me and suggested I speak to #1Pop about getting it for her for Christmas.

And so I arranged it, thus bearing the wrath of an inexplicably emotional and whiney #1Hubby, who had apparently been under the impression that saying I wasn't returning it, meant I'd be buying it for him for Christmas.

Which totally makes my planned gift of scratchies and a Bunnings gift card look a little "myeh...".

Seriously, it has been like Domestic War in our family ever since.

"I'm your husband, I've been vacuuming this house since the dawn of time, and if you ever want me to do it again you will buy me this machine or forever suffer the dust encrusted consequences while clearly proving that you don't love me and the past 17 years together have meant nothing to you."

"I'm old and can't push a big vacuum around like I used to.  Let me enjoy my final vacuuming years in luxury and safety, not risking popping a hip pushing around the heavy old vacuum I currently use when preparing the house for my darling grandchildren who I also frequently babysit for you.  Also, I gave birth to you and that trumps everything. EVERYTHING."

We're known for our overly dramatic stance on things.

And so I am currently suffering under the hurty eyes of #1Hubby, absolutely filthy at me for handing him a taste of the good life and then snatching it away.

He's not been the same since he had to revert back to our old clunker of a vacuum.

I'm not sure, but I thought I saw him stroke a picture of a Dyson DC59 in a newspaper advertisement.

But not until #1Hubby's birthday next year.

Because I am all about giving the gift that keeps on giving.

I'm not a vacuumer.  I was skeptical about paying so much for an appliance that doesn't produce cocktails and/or macarons.  But I can honestly say that I can absolutely see the value in this machine.  It works quickly and effectively, which is super important to someone who hates wasting time on cleaning when there are Ebay auctions to be won, Facebook profiles to trawl, and Twitter witticisms to be crafted.

To quote someone far more verbally succinct than I:

Want to know more?  For full statistics and technical specifications, check out the DC59 on the Dyson website.

Win your own 2 week trial with a Dyson DC59, plus a 20% discount code to keep it when you realise you can't possibly part with it after 2 weeks

For your chance to win, complete the entry form below, answering this question:

What problems would you like Dyson's engineers to solve in your home?

When can I expect something like that, oh great and clever Dyson engineers?