Halloween may be an American tradition, but I'm all for anything that allows me to don my other persona of a trailer trash mama who likes to drink and wear elastic waisted garments with food remnants all over them a la Britney in her head shaving days.

That is my go to costume.

It means I don't have to put much time or effort into dressing up.  No FFS!?

A few years ago our neighbours and their 3 kids came a knocking on Halloween.

They didn't think to warn us that they were having a Halloween party and would be the very first ever on the street to go trick or treating.  FFS!?

I madly scrambled to grab anything that passed as a treat.  Including chocolate biscuits, yoghurt covered dried fruit (which I lied and said was little round white chocolate balls) and a bottle of Ice Magic ice cream topping (FFS!? to that because I love it dearly and rarely buy it).  FFS!?

The following year I was ready for them.

I bought enough chocolate and sweets to send a small nation into a sugar frenzy.

So of course I had to eat all of the things myself FFS!? / No FFS!?

The tantrums were epic, and totally appropriate of the scariest day of the year. FFS!?

This year, I went all DIY and created little packs of treats.  We took some to school and gave them to close friends whose mothers mouthed shed words at me for sugaring their kids up straight after school, and I smiled and flipped them the finger.  No FFS!?

Check out my handiwork: 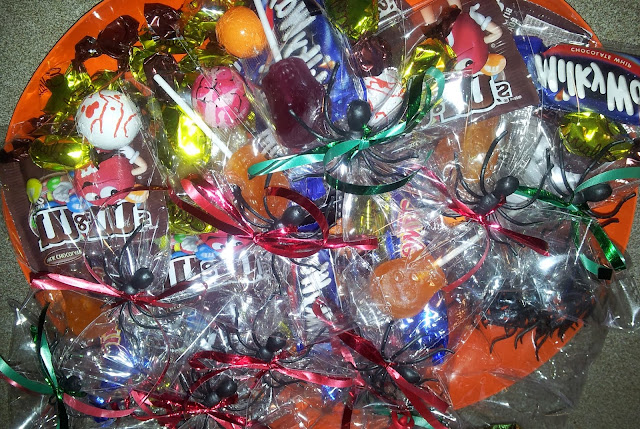 Because a crappy amount of chocolate and candy looks far more impressive with a plastic spider, served up in individual baggies, right?

Who wants to guess how many trick or treaters I've had so far?  FFS!?

The kids are waiting around the front door in their witches hats, all excited, getting more restless by the second.

The whining is escalating, the boredom and disappointment setting in.  FFS!?

They are totally setting the scene for my trailer trash ranty Britney to yell over to them to shut up and stop fighting.  FFS!? / No FFS!?

And I fully expect to have to eat all of the things myself.  Again.  FFS!?