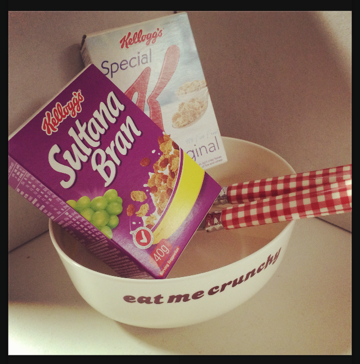 I'm talking crunch versus soggy, versus the fence sitters - the scrunchies.

Kellogg's have actually conducted extensive research in the interests of this great cereal debate.

Turns out, we Aussie's are crunchers.  Not ones to let our cereal sit around absorbing milk in the bowl and becoming soggy.

As a salute to the 73% of Aussie's who loathe sloppy cereal, Kellogg's has created a new cereal bowl designed to stop your Rice Bubbles from bloating.

Because nobody likes fluid retention, right?

In the interests of research, I put the bowls to their test (am not prepared to admit how long it took me to work out where the milk went). Skeptical that the bowl would actually keep the cereal crunchy.

Skeptical that a fancy bowl would save the Corn Flakes from Miss5's standard 40 minute breakfast consumption.  Because I don't care how aerodynamic the bowl is, when the cereal is floating in the milk for 40 minutes, it's going to get soggy.

Skeptical that at least one of my kids wouldn't pull the removable 'tray' out and use it as an airborne projectile.

My Special K stayed crunchy (am off to buy a red one piece to skip along the beach in, thus completing the healthy living facade).

Mstr5's Corn Flakes were largely on his clothes and the table, as per usual.  I did, however, note their crispness as I cleaned up the debris.

Miss5 ate in record speed - under 10 minutes - because she thinks the bowl is going to give her magic powers.

The official general consensus from my own market research is this:  The cereal holding shelf is excellent at capturing the attention of whiney, sleepy kids when you're desperate for them to just hurry up and eat so you can get out of the front door before the school siren goes - for recess.

And it actually works.

You scoop / shovel / push (OMG...another cereal debate) as much cereal off the shelf into the milk as you want, leaving the rest nice and crispy on the shelf.

Thanks to Kellogg's, I have a family pack of four of these anti-soggy, alleged magical power producing cereal bowls (AKA Eat Me Crunchy bowls) up for grabs, complete with matching spoons (because obviously they are superior to regular spoons), and a selection of Kellogg's cereals.