It's been a week between posts, but my butt cheeks have only just sufficiently un-clenched in order for me to recount the tale of how a dodgy knock-off Transformer nearly cost me my modesty.

They day I was leaving Cambodia, I realised while packing, that I had a bazillion more things for Miss5 and Miss8 than I had for Mstr5.  Panic stricken at what would be his obvious assumption that I loved him less on account of the 2 gifts for him and 28 each for the girls....thus prompting him to act out via a downward spiral into cutting school and experimenting with drugs and booze....I jumped into a tuk tuk and headed to the Phnom Penh equivalent of a $1 shop.

Just imagine, if you will, the quality toys you can get for 4,000 Riel in a time-poor, panicked frenzy.

So I chose a dodgy, knock-off Transformer. 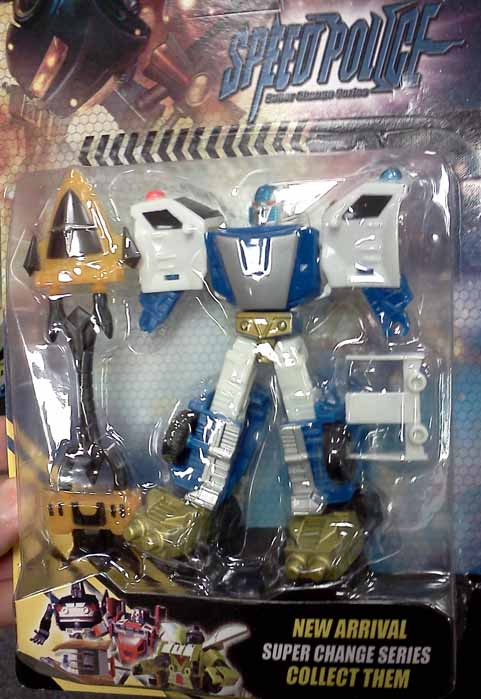 Hey big spender!  Mummy missed you soooo much, to the tune of three dollars!

So I rushed back to the hotel, finished packing, downed a final $2 cocktail and headed to the airport with my travelling companions, including my niece.

Which is where it all turned to shit.

(More about my stellar airport skillz in the next post).

After a few decades in the check in queue, we headed upstairs and through immigration.  Finally, the light at the end of the check-in tunnel - Duty Free and the bar - were a mere hand luggage security check away!

My niece went through, boarding pass scanned, and waited on the other side for me.

Nothing kills my travel buzz quicker than an armed guard with poor English skills questioning me about a WEAPON IN MY CASE.

Everybody was looking at me as I was quickly led back the wrong way through immigration and downstairs, and out the back behind the check in counters to a rabbit warren of different rooms and baggage scanning equipment.

I was treated to a vague pat down, and then motioned towards a private room which had a box of RUBBER GLOVES ON THE WALL.

My mind was all OMG IT'S A CAVITY SEARCH ROOM!

It was possibly just an interview room, but you know, rubber gloves on the wall and I watch Border Security, so I knew cavity searches were a possibility.  In hindsight, not likely for a Transformer misdemeanor, probably more a suspected drug mule.  But, hey, I was freaking out and I saw rubber gloves!

Anyway, it was at this point that my arse cheeks clenched up and remained that way until just a few days ago.

Just before I was led into the room that signalled the point of no return, my suitcase was hauled up onto the bench.

WEAPON?  WEAPON?  YOU HAVE WEAPON?

Suitcase opened and contents flung about and, finally, the bloody faux Transformer is pulled out of the case and eyed with suspicion.

The toy was poked and prodded in its plastic packaging, arms were broken off but I wasn't about to be all "hey, what up with the heavy handling?".  I didn't want to appear rude or anything.

Then the guard pointed to an image of one of these banned electronic mosquito bats. 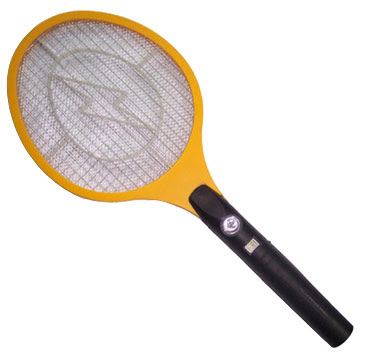 The kind that I could easily get at home for $5 from the discount store if I had the urge to play tennis with mosquitoes....

Seriously?  How does a toy robot look remotely like that?

Thankfully, the door to what may or may not have been the cavity search room was promptly slammed shut and the guard motioned for me to re-pack my case.

"Is okay. You can go now!"  said with a big, friendly smile.

Tell that to my butt cheeks that were still in lock-down mode.

I was so relieved I didn't know whether to fist bump him or hug him.  Instead I gushed a million relieved thank yous - which I'm certain just made me appear guilty and like I'd dodged a bullet, and therefore when I return next year, I am expecting a repeat performance.

I'm pretty sure I could score my own episode of I Shouldn't Be Alive, based on this experience, right?

With Angelina Jolie playing me.  Naturally.

While I'd like to say that my thoughts were with my children during what I expected to be my last 30 minutes of freedom, truth be told, they weren't.  I was more concerned with the possibility off a cavity search, and trying to work out when I last took care of business.

Lest I present anything less than cavity-search-ready, had it have gone to that next step.

My take out from the whole experience?

Next year I will be going in totally prepared....