Valentine's Day is kind of a massive, enormous, huge.....non-event in our household.

In that old 'cow / milk' scenario - Bought the cow 15 years ago, had the milk *slightly longer*, and now have three loudly mooing calves to show for it.

It's just another day in these parts.

Which is why this card took me by surprise Saturday morning....

I hate spending $5 - $10 on a piece of cardboard featuring a false image of romanticism on the outside, a cheesy poetic verse inside.

But this?  This is awesome.

It came with a flat white, delivered to my bedside.

#1Hubby totally gets me.  A slightly gross, funny, and not remotely cheesy card and a good coffee.  Best. Valentine's. Ever.

Which is good, because otherwise, it totally sucked thanks to the other man in my life, Mstr6.

He refused to wish me a Happy Valentine's Day.

Which does not bode well for our upcoming marriage in Bali that he has, until recently, reminded me about at every opportunity.

Ignoring the whole wait until you're a teenager and I kill your street cred by telling all of your friends how you used to propose to me on a regular basis.... ignoring the Jerry Springer potential (should his proposals continue to an inappropriate age).....

He totally knows my weaknesses.

But, this year, nothing doing from my most ardent admirer.

So I did what I usually do, and declared V Day to be Vodka Day, with the assistance of Facebook and someone else's far more clever word play and imagery. 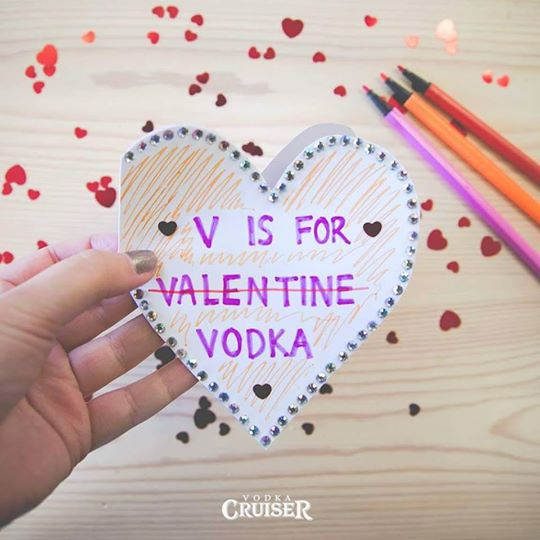 PS - As I finished writing this post Sunday morning, Mstr6 came running up to me to show me his toy plane that he just fixed (with the assistance of an entire roll of tape, FFS).

I praised his efforts.

He was in good spirits.

I held on to him in a one sided hug, while he covertly/blatantly attempted to wriggle free of my loving embrace.

Me : So who do you love more than anyone else in the whole entire world?

It has always, always been me.

So I released him and tried not to take delight as he almost tripped.

Am now off to eat my feelings of rejection via a couple of his early purchased Easter Eggs.