My latest absence (and associated flimsy excuse) is because I am going OFF THE GRID.

Except for booze, because who has the time to wait for all that brewing and distilling and watching a few bubbles rise and getting ridiculously excited - like the equivalent to popping a bottle of France's finest.

Myeh.  So we're calling it SEMI SELF SUFFICIENT.

Jumping on the coconut oil bandwagon has really helped.

Some probably not intentional.

Lucky it is organic.

I'd also like to point out that my new off the grid / semi self sufficient status disclaimer also excludes electronic devices.

I am only human.

It's probably more of a I am LAZY and couldn't be bothered going out for takeaway food, so I COOKED INSTEAD thing.

True story - took me less time to cook than to get my "going out in public" clothes on and restore peace and order when the whiney three fight to come along on a takeaway run as if we're going to Disneyland....

But I'm going with the far more impressive statement - I AM GOING OFF THE GRID AND BEING SEMI SELF SUFFICIENT.

It all started when I wanted dip with my wine and cheese, and was too LAZY and not prepared to drive after a couple glasses of Dan Murphy's finest non-French cheap bubbles.

#1Hubby was completely and outrageously useless.

Totally unhelpful and not doing his bit with the hunting and gathering.

So I MADE my own dips - plural!


Beetroot - half arsed pic because the kids love beetroot dip and I turned my back for 5 seconds (it was more like 10 minutes - but it was Facebook distraction time so it's like equating dog years to human years or something similar), and the little darlings had polished almost all of it off.

They denied it, of course, but the purple rings around their three smirking mouths gave them away.


For my revenge I informed them that beetroot was a vegetable, and revelled in their outrage and disgust. Hah! 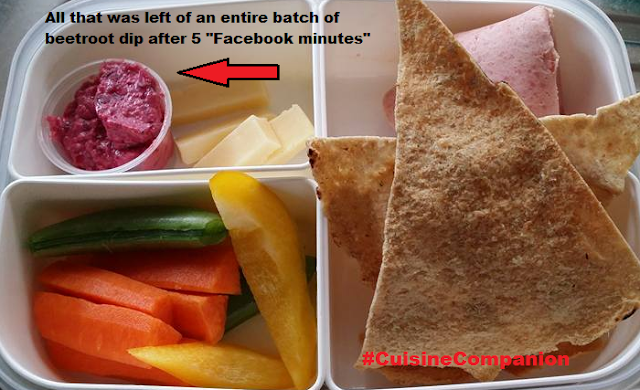 For my next trick, I made  FIRE!  HOMMUS!

All of the yums and back patting for making it myself, preservative free, and indulging in a vegetable (chick peas are veg, right?) to totally balance out the soft cheese and cheap bubbly.

Then last night, because I was on a roll, I decided to create the Indian takeaway we were jonesing for. 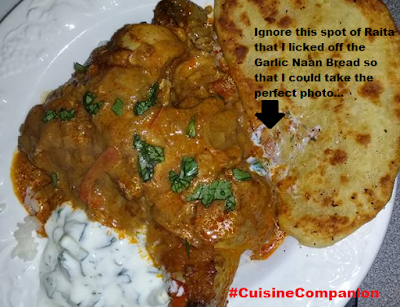 Am now considering opening up a dodgy, unlicensed, unofficial takeaway joint at my place.

Just cooking what I feel like on any given day, courtesy of my Tefal Cuisine Companion.

Because it literally took me less time to prepare my Butter Chicken, home made garlic Naan Bread, and equally home made Raita - than it would have taken #1Hubby and I to have a Parliament Question Time style childish debate over who should be going to get the takeaway.  And then arguing further over what to have.  Debating whether or not the person picking up the takeaway has the right to choose cheese naan over garlic, to dictate poppadoms or no.

Seriously, biggest controversy of our marriage after the kids.

Anyway today I'm going all out - making a cake...wait for it....THAT DOESN'T COME FROM A BOX!