Anchors Away : We're going on a cruise

After extensive research, I came across a cruise ship with kids club hours longer than my go-to resort.

That was enough to tip #1Hubby over the edge.  We were all "take our money!".

That was almost a year ago.

#1Hubby marked the one-week-to-go countdown by repeatedly advising the kids of just how many hours the kids club is open.

Miss7 is psyched.  She's keen to swim in a pool on the ocean.  She was planning on taking the cat swimming with her, until advised pets are not allowed on cruise ships.

Mstr7 wasn't too fussed either way, until we told him about the Lego room in the kids club, and now he won't shut up about it.  God help us all if that one feature doesn't live up to his expectations.

Miss10 is pre-tween, so she can't decide if the kids club equals being parent-free (and is, therefore, uber grown up), or if she's being lumped in with the little kids in a Daycare type scenario.  Thank the Vodka Gods for the iPad room, where I expect she'll park herself when not trying to covertly drown her sister in the pool.

For my part, I selected the all-inclusive drinks package, so no matter how it plays out, I will be merrily bobbing up and down in the ocean for 12 nights.

I figured the kids are fairly well travelled, and getting older, so I put their suitcases on their beds yesterday, and told them to pack what they thought they'd need for a 12 night cruise around Indonesia.

There was a Catfish marathon on TV, so I wasn't really paying attention, and this is what I found when I surfaced for air/wine.... 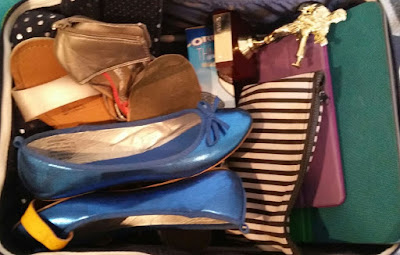 Miss10 packed herself FIVE pairs of shoes (plus her slippers), TWO iPads, her collection of lip gloss, a box of Oreo's, and her recent karate trophy that she, clearly, can't part with just yet. 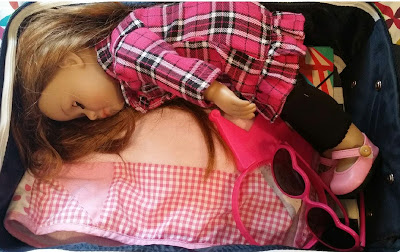 Miss7 opted for her version of the essentials - her enormous, life sized doll (would love to see how that suitcase xray went down...).  Plus the mandatory pink flashing crown headband (obviously), and matching pink heart shaped sunglasses.  There is a pink blanket, but it's not for the doll.  It's for the cat.  Because she thought she could get around the no-BYO-pets policy, by packing him in her case.  Again, I'd love to see that suitcase xray go down. 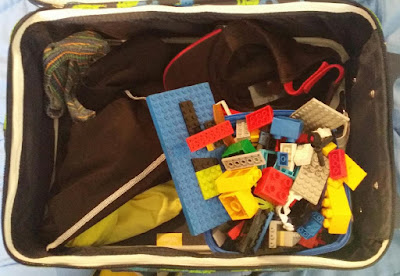 Mstr7, and finally, a child that isn't a full nudist.  He's packed a single pair of jocks.  Just the one.  Plus his bathers, and a half a suitcase full of Lego.  He's obsessed with the Lego aspect of the trip.  Probably won't realise we're on a cruise ship at all, because he'll spend his every waking minute in the Lego room (pending room service agreeing to deliver there).

For such well travelled kids, they certainly take after their father when it comes to packing.

He once demanded to pack his own suitcase, and forgot to pack any jocks or pants.  Lucky for him, I am totally OCD and snuck a peek in his case and repacked it for him.  It was back in our honeymoon phase, so I kindly packed the missing essentials.  Which totally would not happen these days.

#1Hubby and I are currently locked in tense, United Nations worthy negotiations, over just how many shirts he needs, versus how many clutch purses I can't live without.  It's not really going well (read: I'm not winning), so we will probably literally mark a line down the middle of the suitcase and cease all communication from here on out.

Fingers crossed he forgets all his pants again.

Pacific Eden, are you ready?  You have until Monday to stock up on the bubbly, medicate the Kids Club staff, and generally brace your crew for all of this awesomeness.