It's nearly Easter - grab your hot glue gun and get ready 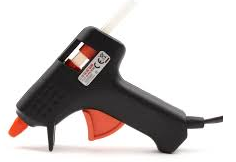 It's that time of year again - the annual Easter Hat Parade.

I can almost smell the scent of my hot glue gun sizzled skin in the air....again.

Oh yes, that was 2014 when we attempted a giant rabbit larger than his head...

That one?  Well that little moon shaped scar comes courtesy of 2017 when we really
embraced the GO BIG OR GO HOME philosophy...

Ahh yes, my favourite, the one that looks a bit like Beyonce if you squint and do a
handstand using just your left arm (shut up, I totally could...) - that was 2011 when
I was fresh to the Easter Hat Parade farce and really thought I knew it all...

The reality is, the hats are almost always made or bought by parents.

The kids who make their own never win - my kids haven't caught on to that fact yet.

Each year they live in hope.

It's not that they're totally enthused by the whole idea of the festive joy that is an Easter themed event.

It's just that they want the prize.  Not for the glory, but for the CHOCOLATE.

Now, I'm not a newbie.  This isn't my first parade.  In fact, due to working at their school, I'm in charge of arranging class prizes and voting.  I know EXACTLY what the glory is worth.

Now that we know the less than impressive value - what is the price of said glory?

At my worst, it was around $30 per head.  With 3 children competing, I was out of pocket almost $100.  SO MANY sequins, ribbon, foam balls and rolls of packing tape...

One year, the price of fame was $3 per head - for a last minute Dollar Shop grab of whatever hadn't already been claimed by other half-arsed parents.  It must've been a really hectic year all round, because the parade was full of the same lame cardboard bunny ears and rabbit hats, courtesy of the now very sales-happy and rolling in cash Dollar Shop.

Last year, I was down to just two (on account of Miss13 moving on to High School where they are way. too. cool to bother with such things).

But we were all a bit over it, and so we skipped it.

This year, they're back at it with a vengeance.

I don't know why.  I don't know which little bastards revved them up and got them all enthusiastic in their respective classes, but the Twin Tornado are out for blood the win, once again.

I have considered out-sourcing.  (Karen B - I'm looking at you.  You have a killer record of wins, and I'm not above begging, should I hot glue gun my digits together and be rendered utterly useless).

Now, to be clear, I'm not taking over and making their hats for them.  BUT HELLO - HOT GLUE GUN AND MISS10 - THE FAMILY SADIST.

I could make a mean profit taking bets on exactly how long it will take her to:

a) accidentally singe her brother's arm/hair/leg/eyeball
b) accidentally set the very cheap and flammable curtain on fire
c) accidentally poke her older sister in the backside and burn a hole through her very expensive school uniform.
d) accidentally do all of the above - because she is my child, and we all know that I was an infamous pyromaniac
in my early years (as briefly glossed over / owned on the interverse here and here).

So, the point is - it's genetic.  And always an accident.

Therefore, one of the tens of people reading this, think of me as I swear under my breath all weekend, supervising and trying REALLY HARD not to intervene re: the hot glue gun.

At least it will distract me from the fact that I've currently spent $23.75 for the Twin Tornado to have a shot at a $5 chocolate prize each.

All you mathematicians out there....how many bottles of vodka have I wasted on the Easter Hat Parade over the years?

Minus the cost of just buying a $5 chocolate bunny each (and let's be honest, I'd probably go the budget, oily, no-name brand for $3 each).

Posted by Parental Parody at 4:44 PM