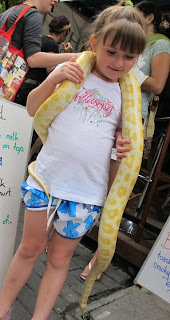 Forgive the lack of posting for a week - I wasn't in a comatose state due to too many Mojito's, nor was I buried alive under masses of shopping bargains.  The good old reliable Bali internet went down.  I admit to minor panic attacks at the time, but it did afford me more shopping and cocktail hours, so I can't complain too much.
My final Bali post is dedicated to Miss5, as she has had a ripper of a week.  That is above and beyond taking over the running of the hotel and bargaining at the local markets better than yours truly.
First up, my Miss5 has also started ordering her own drinks at the swim up pool bar.  She waits until I'm at the other end of the pool, and asks for her watermelon juice or water.  I'm too overjoyed that she would consciously choose to order a drink that is so healthy, that I don't tell her off.  But I probably should have.  Because after a few days she started checking out the plastic cocktail lists on the bar.  Having perused the options, she went for a Toblerone Feast - because, without being able to read the name and only going by the picture - Miss5 wanted the drink with the chocolate on top.  Which would actually mean less calories for me if I let her have that top layer of chocolate and she left me the alcohol.  But I'm fairly sure I wouldn't be able to enjoy it through the disapproving stares of other parents.  Plus she is a complete hog with a drink, and always takes more than her half.  Just ask my father - they used to share a milkshake, but they started pinching the straw to stop the other one sucking up more than their share.
Secondly, Miss5 and I happened upon a fab new coffee shop in Bali.  I say this because - for anyone who knows Bali - instant coffee Nescafe doesn't cut it when you're used to a Latte or a Flat White.  This little coffee shop is Australian owned and run, and has REAL coffee.  It's not the first in Bali, not by a long shot - but it is the first within walking distance of our hotel.  I'm delighted that I can team my morning's exercise of a 15 minute walk each way (a very brisk walk at that, because if you slow down for a nano second the shop owners are on you to buy buy buy) with the lovely pay-off of decent, real, proper coffee.

Anyway, we were visiting said coffee shop just a few days ago, and I nearly died when I went to walk in and standing on either side of the entrance are two Balinese ladies holding SNAKES.  SNAKES IN A COFFEE SHOP.  This would explain why every table at the back of the shop is occupied, and only the front tables remain empty.  Not one to miss out on a caffeine hit, I valiantly back up and then hurdle through the doorway to the furthest available seat away from the snakes.
Only once I'm safely seated, do I remember Miss5.  She is still outside on the pavement, talking to the ladies holding the snakes.  I attempt to sound all aloof and cool and as if I regularly take my morning coffee with a bloody enormous python at the next table - and call Miss5 in to order.  Without looking at me she yells "It's OK George, I'll have the usual thanks."  In a manner that really does come across as a Miss5 who takes her morning smoothie with a bloody enormous python at the next table, AND occasionally shares a table with it.
I keep hissing at Miss5 to come and sit down, but she is ignoring me - big shock...  So I finally give in and simply tell her that she is on her own.  AND I MEAN IT.  The instinct to protect my kids is all encompassing...except for in the presence of snakes.  Then they are on their own.
The Australian owner's teenage daughter shows up and starts PETTING the freaking enormous python.  Then, as I'm squirming in my seat just watching her - she PICKS UP the python and wraps it around her neck to hold it.
The owner comes out and I think she's going to go ballistic at her daughter and shoo her away from the snakes.  No, she starts taking photo's.  Then she offers to let my Miss5 touch a snake.  She points to the very small green snake, which is about the length of your arm, and only as wide as your finger.  Not wanting to lose the uber cool and modern hip young unflappable (too much?) Mother vibe that I am positive I'm throwing out there with my close proximity to the snakes (and only hissed threats and begging at Miss5 to move away, that nobody else can possibly hear - read hoarse SHOUTING) - so I casually say "sure, why not, if she wants to".  Casually, in a strangled choking squeaky type of voice.
Miss5 demands the enormous yellow python - not the teeny tiny little green snake.  It is 6ft long, and as wide as your upper arm.  I am convinced it is going to squeeze the life out of her, literally.  But lest I shatter my cool Mummy facade, I just smile weakly - not down to my brilliant acting skills, more to the fact that I am welded to my chair, unable to speak beyond the endless "shit shit shit shit shit" playing in my own head.
Miss5 is loving herself sick and posing for photos.  I am actually grateful I don't have a camera with me - firstly, because Hubby would inevitably use the evidence against me in court as one item in a huge line of crap parenting examples, when he finds out about this and goes for custody.  And secondly, because I am paranoid the flash will scare the snake, and he'll slither off of Miss5's neck and come after me.  She is young, she doesn't know any better - I still have a long "bucket list" of shopping malls and casinos the world over that I need to visit.  Oh and the twins to look after, of course.
I left the Cafe that day like someone who's just spent an hour operating a jack hammer.  I was jilggling down the road - half caffeine induced, half shredded nerves at having to share my close personal space (and first born) with a couple of menacing looking snakes.
Miss5 says it's the best breakfast she's had. Ever.  I shall no longer bother trying to make pancakes from scratch, since this breakfast can't possibly be beaten, and will just resort to the "shake and bake" cartons in future.
I am attempting to contact the Cafe owner to get a copy of the photo.  I will post it here when I find it - if only to prove that I am only semi-hysterical in my recounting of the story, and to show just how huge the python was wrapped around Miss5's neck.
This is just another example of how my averagely dodgy parenting skills know no bounds, crossing international lines with ease. 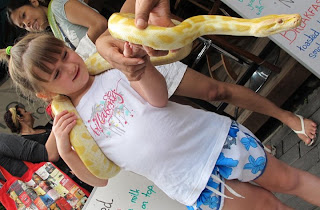 Posted by Parental Parody at 12:53 PM