The Mac is alive and well 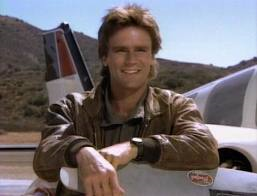 Lately, I've been going all MacGyver on stuff.
The microwave is dead (RIP), and since  I'm too lazy to go out and shop for a new one  I've become all environmentally conscious, I'm making do without one.
How did such a thing get MacGyver-ish?  Well, there's the popcorn.  The first time I needed popcorn (because you never just want it), I went next door to ask #1 Brother if I could use his pretty new microwave to nuke the corn.  The second time I went over, only an hour after the first time, he said no.
It may have had something to do with my bragging about making do without a microwave, only the day before.  I'd ranted and raved and got on my soapbox with everyone about how I wasn't subjecting my kids to microwave....err...waves?  Rays?  Whatever.  Radioactive stuff was not happening in my kitchen.
So it is feasible that he was just sticking the proverbial middle finger up after my lecturing.  Maybe.
Which left me with one problem.  How to make microwave popcorn without a microwave?  I burnt the bottom of a pot, and had popcorn shooting all over the kitchen like a 4th of July fireworks spectacular.  Amusing for the kids.  Not for me, as I spent the next few days finding popcorn in really odd places. 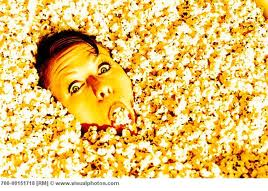 I've had to resort to such archaic forms of cooking as the STOVE and the OVEN.  I've even taken the George Foreman Grill out of its original packaging.  For the first time since I purchased it approximately 4 years ago.  I was greatly impressed with this little gem, watching the fat drip out of the chicken breasts into the fat catcher.  Smugly patting myself on the back for creating such a healthy fat-free meal for the kids.

Until I walked in and found all three of them dipping their fingers in to the fat tray and licking them, repeatedly.
My industrious creativity of the parenting variety has extended beyond cooking.
The trampoline safety mesh straps have broken.  Sure, I would normally ignore it.  But today I  had lots of caffeine running through my system  was feeling super invincible.  Plus, leaving it meant that I couldn't, in good conscience, allow the 2yr old twins on there.  They ricochet off each other like those crazy bouncy little balls.  One or both would've surely ended up with concussion and/or open wounds from hitting the ground.  Would've been tough explaining it away to #1 Hubby and/or child services investigators.
So out came the nylon sewing thread.  It may only be 0.2 of a millimetre thick, but it is NYLON.  And, from my experience, Nylon is super tough.  On account of how many pairs of nylon pants have kept my posterior covered, regardless of torque, tension and strain.
I totally MacGyver'ed the crap outta it.  With, I might add, less equipment than Mac used.  I'm pretty sure he required a paperclip and a pocket knife.  I even used my teeth to cut the ends instead of scissors.  Hear me roar...
I was loving myself sick after this, so I stalked over to the leaking garden hose.  It. Was. On.
Until I realised that nylon sewing thread does not cover gaping holes in garden hoses.
Inside I squelched, leaving a wet trail behind me, which I slipped on after changing into dry clothes.
Finally, I took on the big one : The DVD player that worked 2 weeks ago, but after Miss5 and the twins spent an afternoon alone with it, no longer operates.

Probably suffering severe Post Traumatic Stress Disorder.
After an internal exam to check for foreign objects (broccoli), I started fiddling with the cables.  I fiddled away, twisting, turning, tweaking.  Then I just started moving them around to other holes.  Without the assistance of a manual, since MacGyver didn't use a manual.

Dear Vodka Gods, where is a 10yr old tech genius when I need one?
Eventually, I had to surface.  I was suffocating on the dust that was being stirred up at the rear of the TV.  Sure, I could've vacuumed it up, but Mac never vacuumed, and so neither do I (that's my story and I'm sticking to it).
I can now watch black and white DVD's in the style of yester-year.  If they'd had DVD's back then.  Or Dora The Explorer.
There's a reason MacGyver 'retired' - it's hard bloody work without a microwave and the correct equipment.