On being abandoned and scoring free shit like a rock star 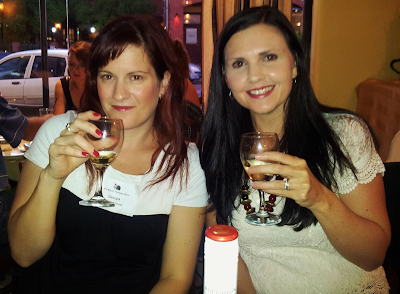 This is a pic from last year.  When we were both a year younger.  Obviously I'm going with that rather than a post 2 bottles of wine, bubbly, and an espresso martini shot from the other week.

I meant to post this last week, but it was scheduled for my 14th wedding anniversary, and #1Hubby, who never reads my blog, had obviously been expecting some heartfelt mushy tribute post or some such shit, as I'd caught him checking my site and asking about what I'd written for the week.

Given that he already had the shits on because I shaved my legs for a date with someone else, I figured silence was my best option, and so I delayed posting this for a week.

So enough of the romantic gushing, on to the post...


I am beside myself.

DearBabyG, my bingo bitch, drinking diva, blogging buddy - she is leaving me.  She's moving to Darwin.  I am filthy disgusted in her for abandoning me.

So we had a final hurrah (she showed up with a litre of vodka for me.  She knows me so well).

We planned to go out classy - high tea style.

Clearly we looked classy, as we were never offered the tea part of our high tea.  Instead, we drank our glass of bubbly before ordering a couple of bottles of wine.

And there was some food too, but whatever.

We regaled each other with witty hilarity that was pure gold.

She offered me a lounge, should I want to visit her in Darwin.

I offered her my toy room to avoid all that, so she could stay here in Perth.  I forgot to agree to install Skype on my laptop so she could keep in touch with BabyG and HB, which is obviously the only single reason she politely declined.

I told every waiter that passed our table that she was leaving me.  Moving away.  With her husband, no less (in a totally disgusted tone of voice).

I'm certain the staff assumed we were closet lesbian lovers having an affair behind our husbands' backs.

The restaurant emptied.  Tables were cleared.  Chairs were stacked.  Staff were leaving.

Still we drank, desperate to drain the bottle rather than leave any of the winey goodness behind.

We felt like total rock stars to be the last to leave, yo.

But not before explaining how we both shared the name of the restaurant and therefore we shouldn't have to '5 finger discount' our used, monogrammed wine glasses.....surely we had earned a clean set.

Be it logic, be it desperation to appease us and get us out the door, whatever - we were presented with a set of clean, fresh, monogrammed wine glasses to mark our momentous final non lesbian affair afternoon.

Of course it pissed down with rain as we prepared to leave.

Rather than delay our exit further, the wait staff presented us with umbrellas.

Apparently people leave them there all the time.

And so DearBabyG scored a trendy, fashionable black lace patterned umbrella, and I scored a big black one.

Who gives you pretty umbrellas as you leave?

People who want to close up and go home, that's who.

Regardless, hello - we had fancy pants umbrellas!

This really excited us because we are both normally discount Red Dot $4.99 budget umbrella buyers.

And so went our final hurrah - the last to leave (albeit at a 5pm early close establishment), with a free personally monogrammed wine glass and a fancy pants umbrella to boot.

We felt so hard core that we very briefly considered crashing the 1Direction concert.  But it was a couple of blocks away and neither of us were wearing sensible walking shoes.

For the record, #1Hubby found the brand name on my umbrella when I got home, and insisted I Google it.

I don't ever step foot in David Jones for fear of down-classing the joint.

I am totally posh now.