Sweet Niblets!  There were tears at Parental Parody Palace today.  Shed by me, and then a few by Miss5 since she thought she should join in, bless her.
Today, I watched the last ever Hannah Montana episode.  So, as a result, I write this with a heavy heart.
I will own it - I am a mega Hannah Montana fan.  It's not the music that gets me in.  It's the one-liners, the easy laughs, the new and improved Billy Ray Cyrus.  Seriously, the man has better hair than I do.  Complete with awesome highlights and layering.
Thanks to the Disney Channel and Porter Novelli, I received a copy of Hannah Montana Forever on DVD.  The final season - the big finale - the big goodbye, adieu, adios, sayonara, peace out. 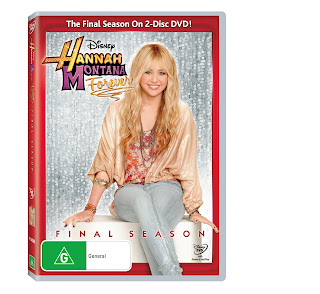 This will be cherished in our household, and is being kept with the parental DVD's, not in with the smudgy fingerprint stained kids' DVD's.  Something Miss5 keeps trying to rectify, so I've had to keep hiding it when she's not looking.
Here's a little sneak peak of what you can expect from the final season :

And here's a few of my favourite bits and pieces :
Watch out for some impressive special guest appearances, including the 1/2 from 2 1/2 Men (Jake); Sheryl Crow belting out a duet with Hannah; and Ray Liotta as the slightly crazy school Principal.
For those hard core Billy/Robbie Ray fans, your heart will go all achy thanks to a killer flashback of Robbie Ray sporting that infamous mullet, and a flashing cowboy shirt. At the same time. Mullet.  Flashing cowboy shirt.  Same.  Time.  Giddyup!
Jackson scores himself a hot b-b-b-b-b-b-bikini model girlfriend. Who actually loves his erm...quirkiness.  No really, it's true.
Lily as her alter ego Lola, with a killer line while trying to hurry Hannah along for an A List party : "I want to get there before Lady Gaga turns the dessert table into a hat".  Amen to that sister!
A classic Robbie Ray one liner while discussing his love life with Jackson : "See, your old man's still got a little giddyup in his get-along", complete with southern twang.  The man has a way with words.
Jackson pretending to be Rico's Dad, channelling a "flamboyant" European Colonel Sanders.  Awesome.  Should be made into it's own Broadway musical. 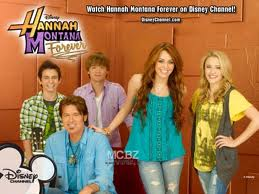 It seems fitting that the underlying issue of the final series is whether or not Miley Stewart should come clean and out herself as Hannah Montana.  There's a bit of heart break, a bit of loving, a lot of laughs, and some horse play (literal) along the way.  All spoken with much rhymey southern drawl.  I loves me some southern drawl!
My only disappointment?  The lack of use of the classic Hannah Montana line "Sweet niblets!".  I was really looking forward to it, but Hannah rarely said it, and Robbie Ray has a new line now : "Sweet Pete".  Not cool, Robbie Ray, not cool.  Bring back the niblets!
And on to the good part - the giveaway!
How to win your copy of Hannah Montana Forever :
1.  Follow this blog via Networked Blogs or Google Friend Connect
2.  Follow on Twitter or Facebook
3.  Comment below with which super star you'd like to claim as your own secret alter ego

Mine would be Super Nanny Jo Frost.  That woman can control even the most wild and feral of children without raising her voice.
The fine print - Terms & Conditions :
Entry is open to Australian residents only.
Winner will be drawn by random.org
Entries close midnight (WST) Friday 10th June
Winner will be posted Saturday 11th June
Even if you're not lucky enough to win, fear not -
Hannah Montana Forever on DVD and Blu Ray will be available in all good Hannah-loving stores from June 8.....one more time now......sweet niblets!